This place full of history and art has also been used as a movie set for the shooting of some scenes of Star Wars and is a destination for many tourists from all over the world in every season.

However, the Bourbon Royal Palace is the site of an ancient legend …

The history of the Reggia di Caserta 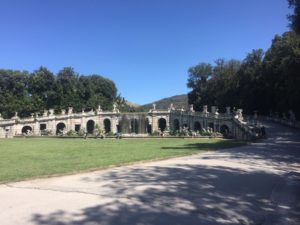 Charles of Bourbon was the one who decided to build one of the most beautiful Italian Royal Palaces ever.

The idea and project of the King of Naples were conceived as a representative building of the Bourbon State and the Royal Palace had to be able to compete with the splendid palace of Versailles in Paris.

After the purchase of land near Caserta for 489 thousand ducats, the construction of the building was entrusted to Luigi Vanvitelli.

In 1752 construction work began on the Palace and the immense Park, together with the construction of the Carolino Aqueduct to supply the new site with water.

At the death of Luigi Vanvitelli, in 1773, the works passed under the direction of his son Carlo.

In 1806, with the conquest of the Kingdom of Naples by Napoleon, Gioacchino Murat was named as the new king of Naples, and was entitled to a personal apartment furnished entirely in the Empire Style.

After 1815, the Palace became the hunting residence of the Bourbons, but the palace fell into a state of decline, until it passed into the hands of the Savoy family, under the Kingdom of Italy. Finally, in 1919, the Palace was ceded to the Italian State by Vittorio Emanuele III. 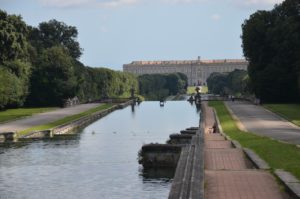 The enormous Bourbon palace houses the large Palatine Chapel, inspired directly by the one in the Palace of Versailles.

It is also possible to visit the Court Theatre with its horseshoe-shaped layout, inaugurated by Ferdinand I and able to accommodate 450 spectators.

The royal apartments open with the Sala degli Alabardieri (halberdier room) enriched by the paintings of Domenico Mondo and the Sala del “baciamano” (hand-kiss room) dedicated to Alessandro the Great, that divides the Old Apartment from the New Apartment.

The old one was inhabited by Ferdinand IV and Maria Carolina and stands out for the rooms lined with silk produced in the Fabbrica di San Leucio (factory of San Leucio).

They also include the Palatine Library and the Elliptical Room, with the splendid Neapolitan Crib. La Quadreria (picture gallery) contains paintings by Giuseppe De Nigris, Salvatore Fergola and painters from the School of Salvator Rosa.

A peculiarity of the garden is that during the design Vanvitelli was inspired by the shape of a violin, so that it would make the outline of the Palace even more sumptuous.

The Park of the Royal Palace of Caserta has an extension of 3 kilometres for a total surface of 120 hectares and is crossed by two parallel avenues along which majestic fountains and basins lead to the Italian Garden and the English Garden.

The grandiose Fountain of Venus and Adonis closes the scene, before the Great Waterfall. The Italian Garden includes the Peschiera Vecchia (old fish pond), a structure built in 1768 by Ferdinando IV to stage small naval battles and nautical games. 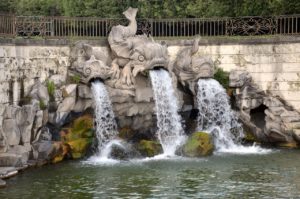 The legend of Rosella

The Royal Palace of Caserta, besides being one of the baroque masterpieces of Italy and an important mixture of history and art, is also a place where legend and mystery intertwine.

According to a legend, in fact, a witch is meant to have hid among the trees of the park and the long paths that run through it.

Legend has it that the Prince Andrea was ready to marry Rosella, the beautiful daughter of a fisherman from Naples.

The marriage, however, was frowned upon by the women of the Neapolitan aristocracy because they, all aspiring to take the place of the girl, were determined to use all possible means to prevent it in every way.

So, they asked the help of a witch for a spell to prevent the marriage and the witch gave them a cursed rose, whose perfume was able to kill instantly.

Rosella decided to smell the rose she had been given for the wedding, but the witch had made a mistake, and the girl happened to be turned into a horrible old woman.

When a witch from Benevento was questioned, Rosella found out that only a kiss from the prince would break the spell.

However, Andrea did not recognize his bride in the old woman and left to look for her, but he died of despair some time later.

The father of the prince, distraught, had the horrible old woman exiled to a cave in the Park of the Royal Palace of Caserta.

After many years Rosella came out of the cave and came across Ulrico, one of the King’s hunters, to whom she gave a holly branch.

But Ulrico died in a hunting accident, and Rosella let out a scream of despair that caught everyone’s attention.

The king, mistaking her for a witch and responsible for the accident, had her arrested.

Rosella asked to see Ulrico’s body one last time, and bending down to kiss him she pricked him with the holly branch.

A drop of blood fell onto the lips of the young man who miraculously awoke.

The two ended up kissing, and Rosella returned to her original beauty.

Two days later, of course, the two married and lived happily ever after! The Anatomy of an Italian Dinner Guide to Wine and Cheese Pairings